How to Use Python Decouple

Web applications relies on several number of parameters to run properly on different environments. To name a few from a Django app settings: database url, password, secret key, debug status, email host, allowed hosts. Most of these parameters are environment-specific. On a development environment you might want to run your application with debug mode on. Also, it’s a clever idea to keep your secret key in a safe place (not in your git repository).

The following is a quick start of how to use the Python Decouple library.

Let’s consider the following settings.py file, to explain how to use the library.

First create a file named .env in the root of your project. You can also use a .ini file, in case the .env isn’t suitable for your use case. See the documentation for further instructions.

If you are working with Git, update your .gitignore adding the .env file so you don’t commit any sensitive data to your remote repository.

Attention to the cast argument. Django expects DEBUG to be a boolean. In a similar way it expects EMAIL_PORT to be an integer.

Actually, the cast argument can receive any callable, that will transform the string value into something else. In the case of the ALLOWED_HOSTS, Django expects a list of hostname.

In your .env file you can put it like this:

And then in your settings.py you can retrieve it this way:

Looks complicated, right? Actually the library comes with a Csv Helper, so you don’t need to write all this code. The better way to do it would be:

You can add an extra argument to the config function, to define a default value, in case there is an undefined value in the .env file.

Meaning you won’t need to define the DEBUG parameter in the .env file in the development environment for example.

In case you want to temporarily change some of the settings parameter, you can override it with environment variables:

If you are deploying your application to Heroku using Git, you can’t have an .env file in your project root. That’s not a problem, because Python Decouple will retreive the environment variables, and Heroku let you define those variables on it’s dashboard.

Inside Heroku’s dashboard, first select your app and click on the Settings tab. 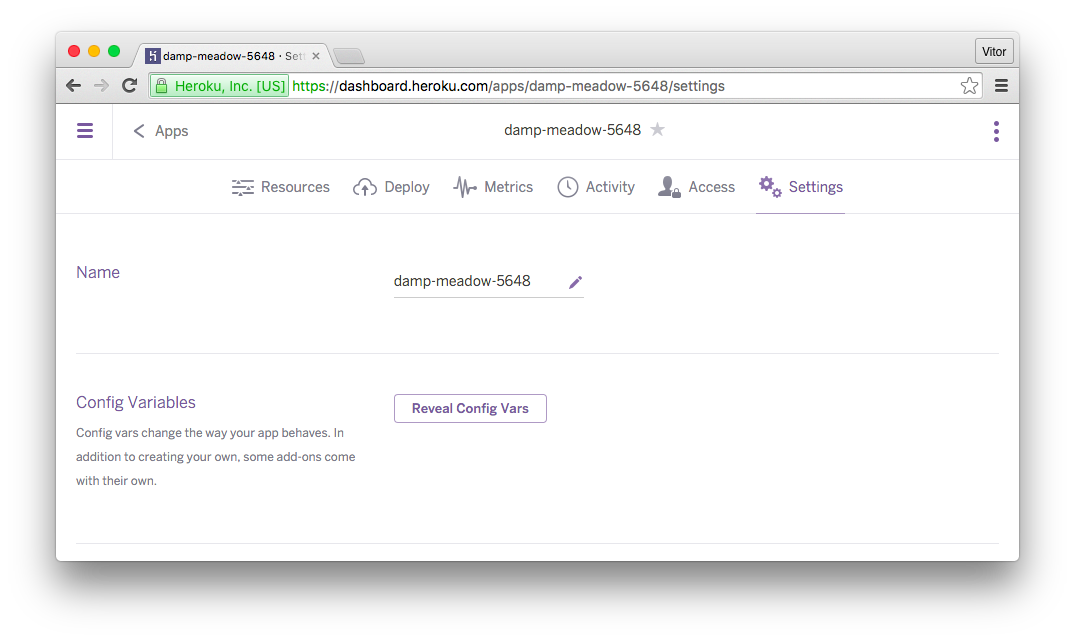 Inside the Settings tab click on the Reveal Config Vars button and add your variables as you would do in the .env file. 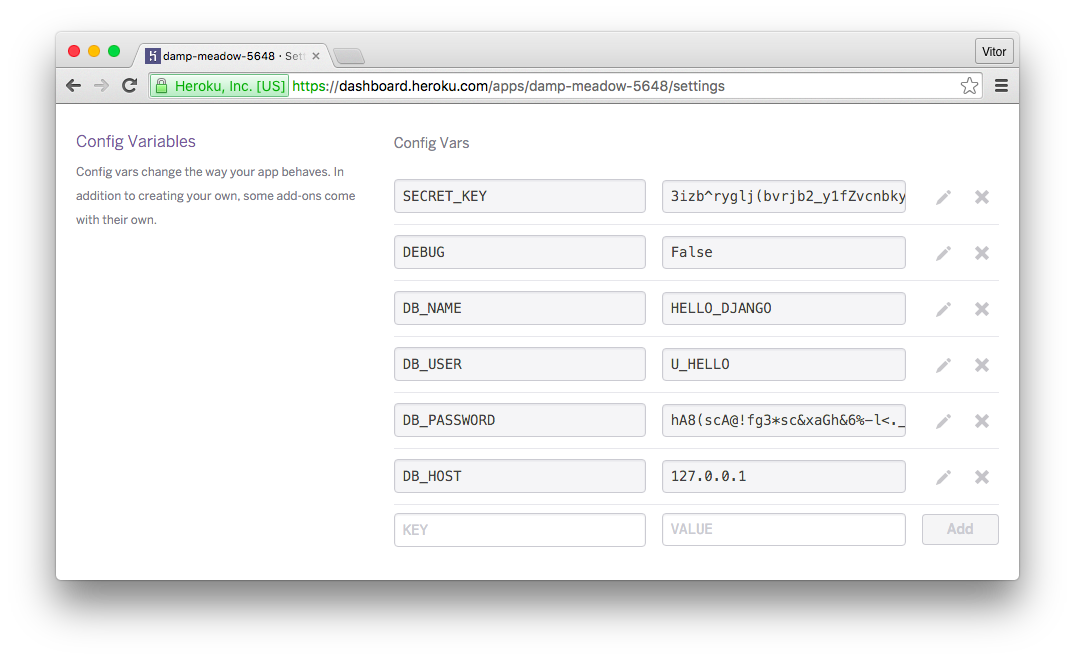 That’s it! You are all set up.

Tip for a easier setup

Since we don’t commit our .env file to the remote repository, and it’s required for the project to run properly, it can be confusing for newcomers who aren’t familiar with Python Decouple to setup and run your project.

One thing I like to do in my open source projects is to commit a sample file, usually I name it .env.example, in the project root, with some sample data. So the one who is trying to run the project must just rename the file to .env and put the proper values. 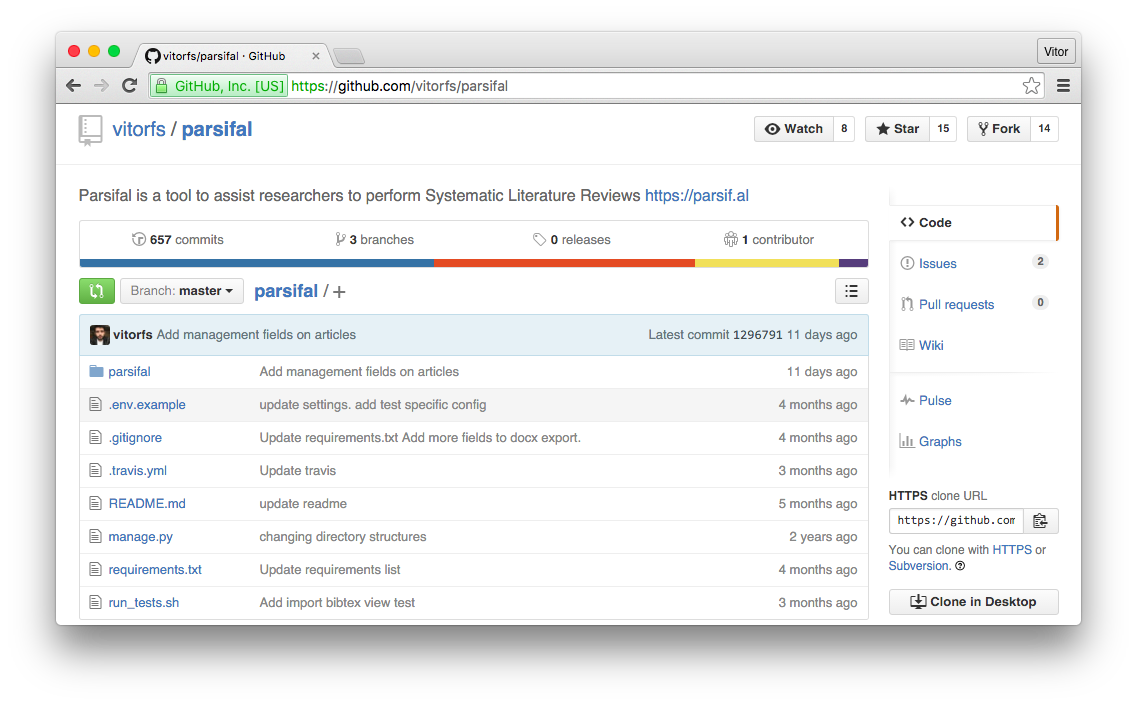 You can see a real use case checking the Parsifal repository.

The previous tip can be useful if you are integrating with Travis CI. Actually I fill my project’s .env.example file with the required parameters to run on the Travis CI environment. Then all you have to do, is to run a before_script renaming the .env.example file to .env.

As I stated before in this article, I use Python Decouple in all my Django projects. So if you want to see some examples, visit the links below:

Python Decouple is a must have app if you are developing with Django. Personally I use it in all my Django projects. It’s important to keep your application credentials like API Keys, Amazon S3, email parameters, database parameters safe, specially if it’s an open source repository. Also no more development_settings.py and production_settings.py, use just one settings.py for your whole project.

Python Decouple was developed by Henrique Bastos and it is distributed under the MIT license. You can learn more about it reading it’s documentation. The source code is available on GitHub. 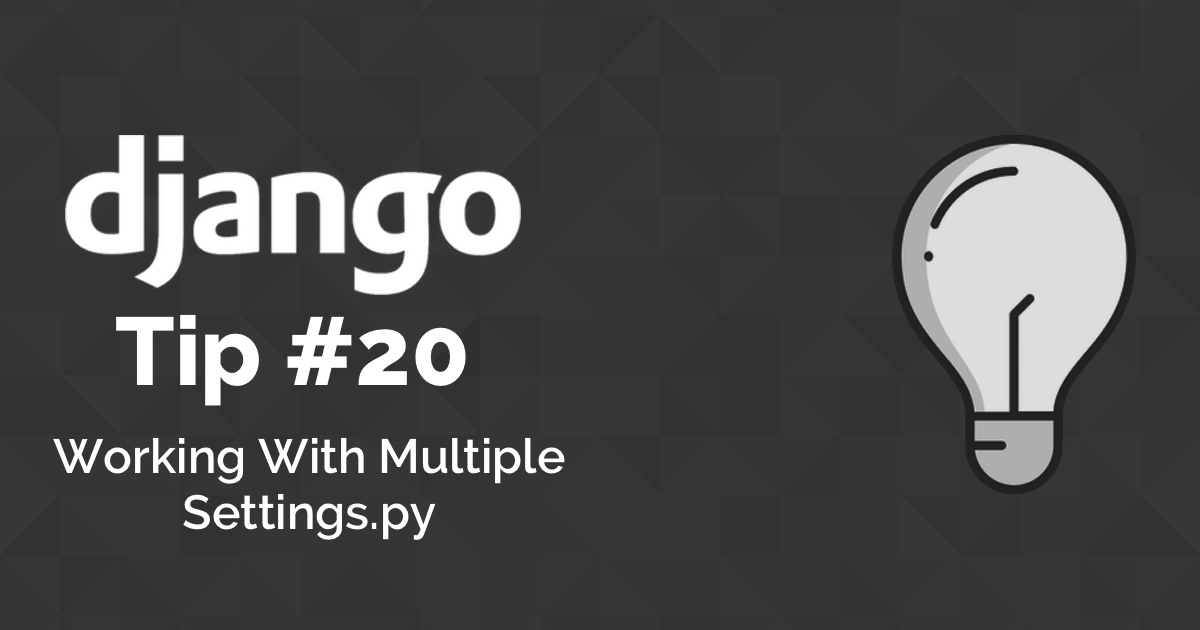