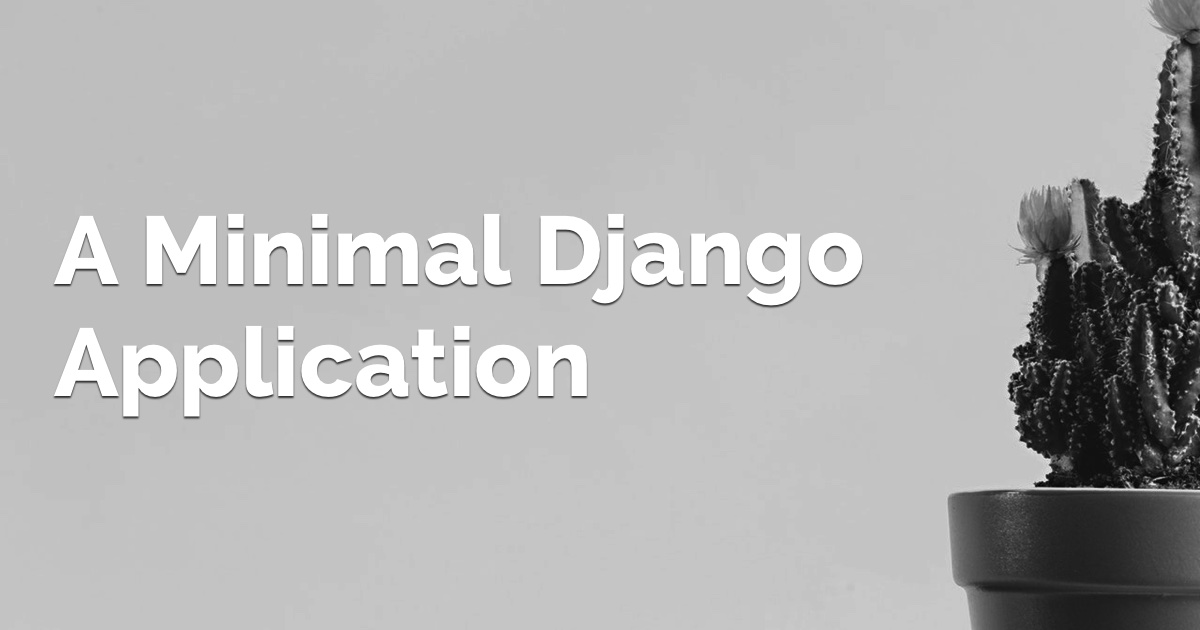 In this article I want to explore some of the basic concepts of Django, setting up a minimal web application to get a deeper understanding of how Django works under the hoods.

An important disclaimer before we start, that’s not a tutorial about how to start a Django application, it’s more of an exploratory experiment for learning purpose.

If you are reading this article, the chances are that you already know that Django is a Web framework written in Python. But that’s an abstract definition. In practice, Django is a Python package that lives inside the site-packages directory of your current Python installation. That means it lives alongside with other Python packages, such as Requests, Pillow and NumPy.

A simple way to verify a Django installation is importing it in a Python shell:

When we first start learning Django, we are taught that we should start a new project using the django-admin command-line utility by executing the startproject command.

The contents of the files above are essentially a boilerplate code that’s generated using the templates inside the django.conf.project_template folder. It’s like a pre-configuration of commonly used resources.

For example, if you are going to develop a Web application, the chances are that you will need a database, handle user authentication, work with sessions, and so on. The boilerplate code from the startproject command makes our life easier. But that’s not the only way to start a new project. We could start everything from scratch. And that’s sort of what we are going to do in this article.

Also, the names are purely convention, which is a good thing because whenever you browse an existing Django project it’s easier to know where to find certain things.

In the next sections we are going to explore the role of each of those files in a Django project.

To run the the development server, we usually execute the following command:

The manage.py script is automatically generated when we start a new Django project by running the command:

Basically the django-admin and manage.py does the same things. The main difference is that manage.py adds your project’s package in the sys.path and sets the environment variable DJANGO_SETTINGS_MODULE to point to your settings.py file.

That means we could run the development server of my project using the django-admin command-line utility. The difference is that we would need to provide manually the information of the path to my project’s package and the settings.py.

So, considering my project is in the following path: /home/projects/myproject, we can start the development server like this:

Or if you are currently in the project root in the file system, you could perhaps do this to save typing:

As you can see, the settings.py module is the starting point of every Django project. It’s the file responsible for putting the pieces together and instructing Django on how to run our project; which apps are installed, what database the project uses (if any), the credentials to connect, where to find the project’s templates, the urls, the wsgi module and many other important configurations.

The name settings.py is just a convention. We could use any other name. As far as we tell Django where to find the required information.

Now that we know the settings module is the central part to run our project, what’s the bare minimum configuration we need to feed Django, so to start the development server?

Before we answer that question, know that Django comes pre-configured. Before loading your project’s settings module, Django will load the global settings that can be found in the django.conf.global_settings.py file.

The link above takes you to the file directly in the Django’s GitHub repository. Take a moment and check it out.

What happen when Django finally loads your project’s settings module, is that it will override the default values from the global_settings.py.

The global_settings.py doesn’t have all the necessary information. We will need to provide at least a SECRET_KEY.

If you check the Django’s global_settings.py file, you will see right at the top of the file that the DEBUG configuration defaults to False. If you don’t override it to True, you will also need to configure the ALLOWED_HOSTS variable.

So, the bare minimum configuration just to successfully start the development server could be either defining the SECRET_KEY and DEBUG=True, or SECRET_KEY and ALLOWED_HOSTS.

Starting a Project From Scratch

To try things out, I created a file named tinyapp.py and added the following parameters to it: 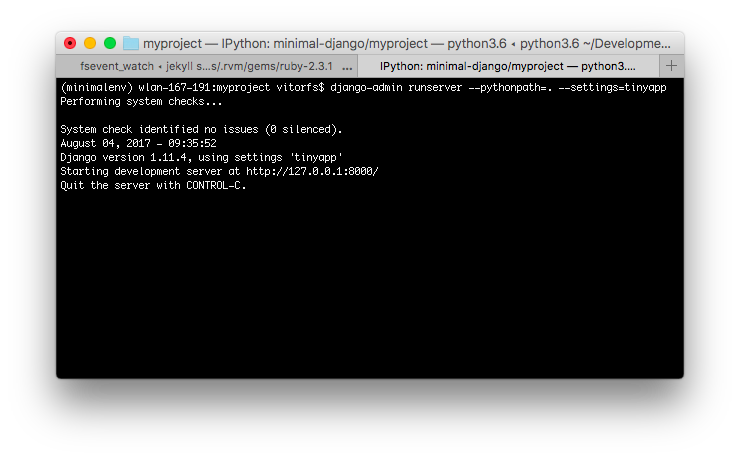 It’s running. Let’s see what happens when we open it in a web browser: 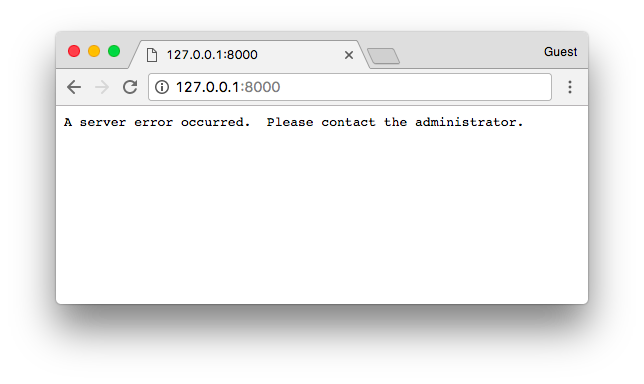 At least something showed up. Let’s check the terminal for some further information about the error we got. Checking the terminal that I’m using to run the project, it says:

At the moment we happen to have no URL or view. Actually right now Django doesn’t even know where to look for URL patterns to see if it have something to process or show.

The ROOT_URLCONF expects the path to a special file that contains a list of URLs so it can match the requested path with the views within our project. This file needs to define a list named urlpatterns. That’s correct! We are talking about our well known urls.py module here.

But, so far we don’t need a urls.py file. We can tell Django to import the urlpatterns from our tinyapp.py file, so it can also be our ROOT_URLCONF. 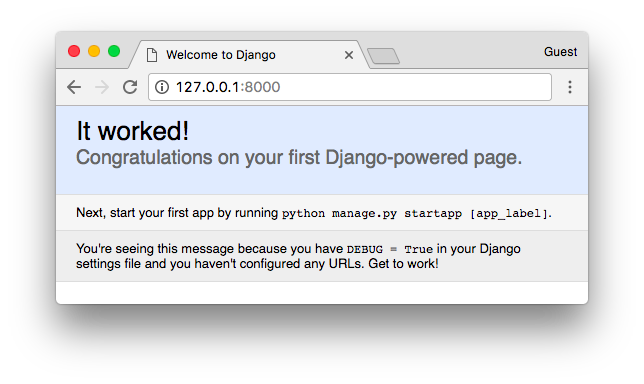 There we go! Our first Django-powered page!

So far so good. But our tiny Django app isn’t doing much. Let’s add our very first view.

A Django view is just a Python function that receives an HttpRequest object and returns an HttpResponse.

Truth is, our view functions can be defined anywhere in our project. Django won’t look for a file named views.py. Again, it’s just a convention. Unless you have a good reason for doing it in a different way, stick with the convention.

We will get there later. For now, let’s keep writing code inside the tinyapp.py file.

Below, our first Django view named home. It simply returns a text saying “Welcome to the Tinyapp’s Homepage!”.

The next step is instructing Django when to return this view to the visitor. We can do that by adding an entry to the urlpatterns list.

The urlpatterns list expects instances of url() which can be imported from django.conf.urls.

To define a url() you need to at least inform a regex compatible with Python’s re module and a view function or the result of as_view() for class-based views.

A basic url routing to the homepage looks like this: 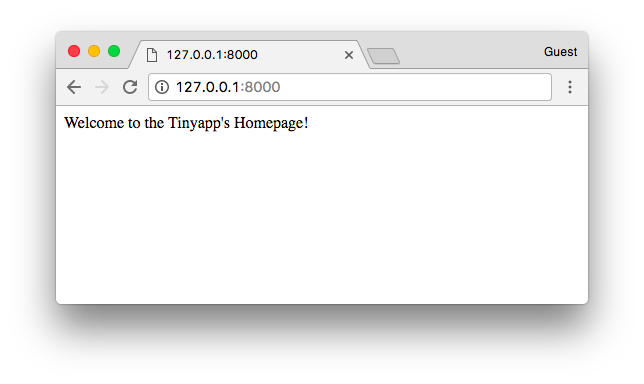 Even though we are just returning a string in our first view, the browser tries to render it as if it was an HTML page.

If you want to return text only, you can pass this information along in the HttpResponse so the browser will know it’s working with plain text only and won’t try to do anything smart with the response body:

You can see that the browser renders it a little bit different, as it won’t try to parse the content as HTML: 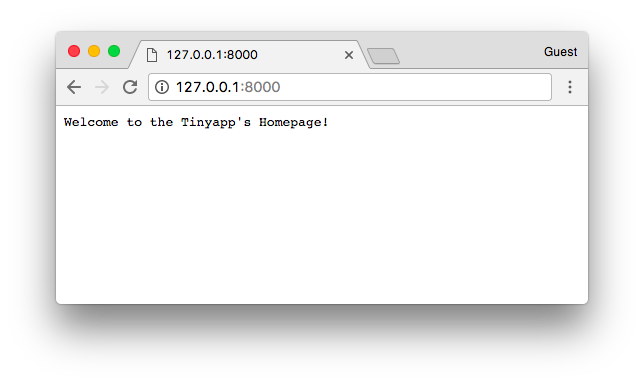 But we know that’s not the case in most of the cases while developing Web applications. Let’s remove the content_type and add some HTML to our pages. 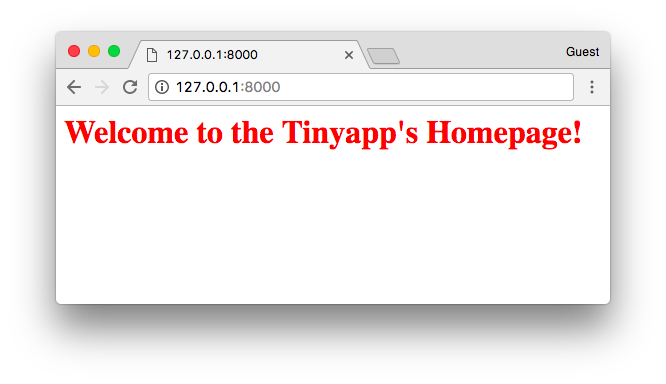 We can keep it on and make it a little bit more dynamic:

Warning! Don't use user's input directly like that in real projects! You should always sanitize the user input to avoid security issues like XSS. 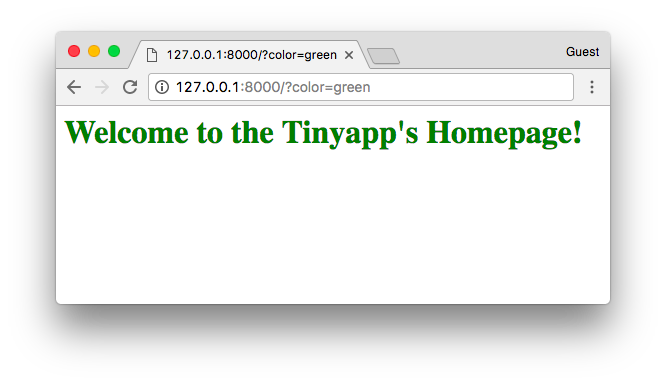 We could keep playing with strings and generating HTML on-the-fly: 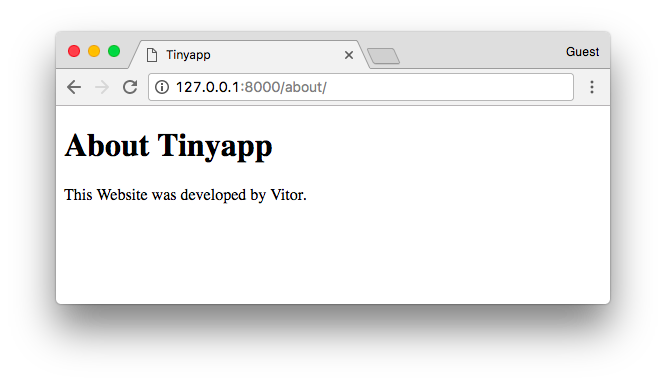 But hey, there should be a better way to do it. And sure thing there is. That’s what the Django’s Template Engine is all about.

Before we can use it, we need to tell Django our project makes use of the template engine:

The Django Template Engine have its own syntax rules. Basically it will read a file (a template), usually a .html file, parse it, process all the special tags like {{ var }} or {% for user in users %} and the final result will be an output string, which normally is a valid HTML document which is returned to the user.

See the example below: 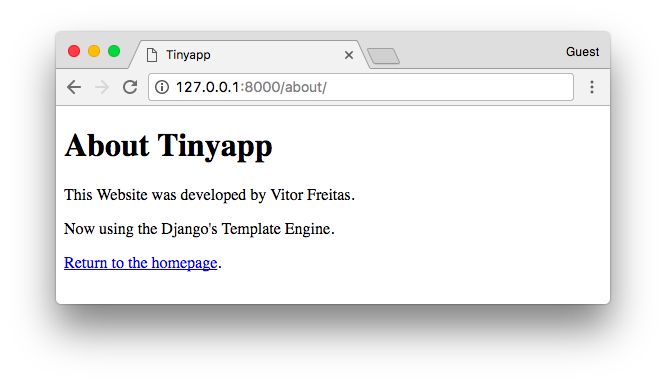 Here we are using the Django’s Template Engine programmatically. But what we normally do is storing the HTML templates outside the Python code and telling Django where to look for the templates.

Let’s do it step-by-step.

First, create a folder named “templates” alongside our tinyapp.py file.

Now, save the content of the about_template variable inside an HTML file named about.html, inside our recently created templates folder.

So, now instead of loading the template from a Python string, we can load it from the filesystem.

First and most importantly, we tell Django where to find the templates:

Now we can refactor our about view:

You know the render function from django.shortcuts? That’s exactly what it does: use the render_to_string function and returns an HttpResponse instance.

I hope you enjoyed reading this article and that you learned something new today! As I said in the beginning, this was just some sort of experiment. I strongly advise you to get your hands dirty and try things out. It makes you feel more comfortable with Django development, as you get a deeper understanding of its mechanics. 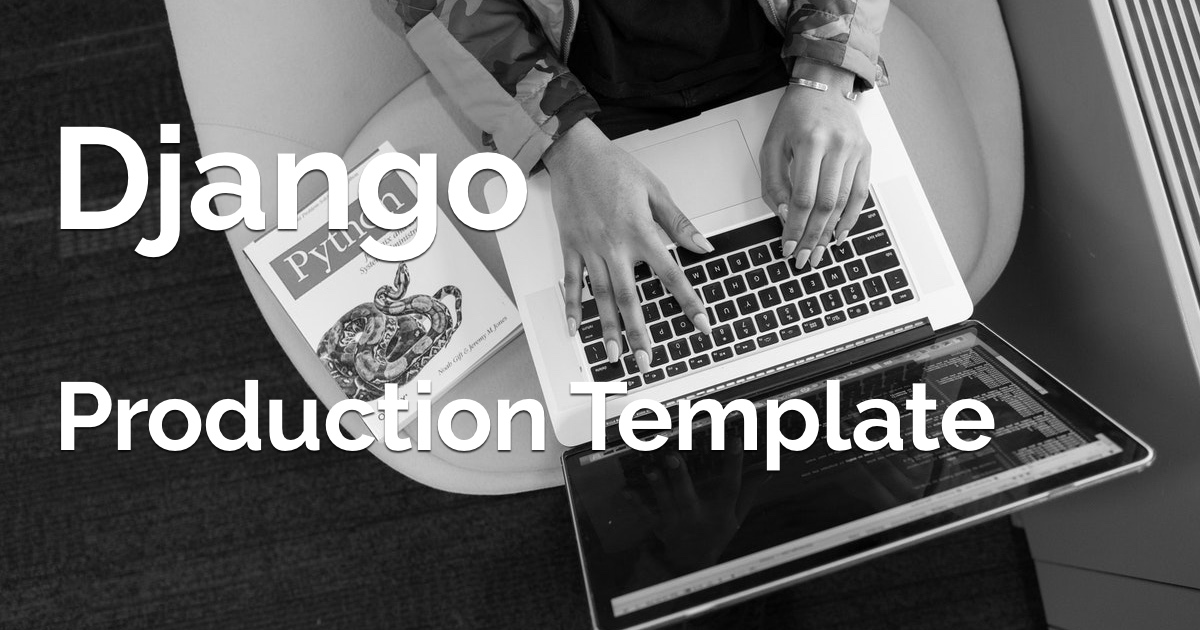 How to Start a Production-Ready Django Project 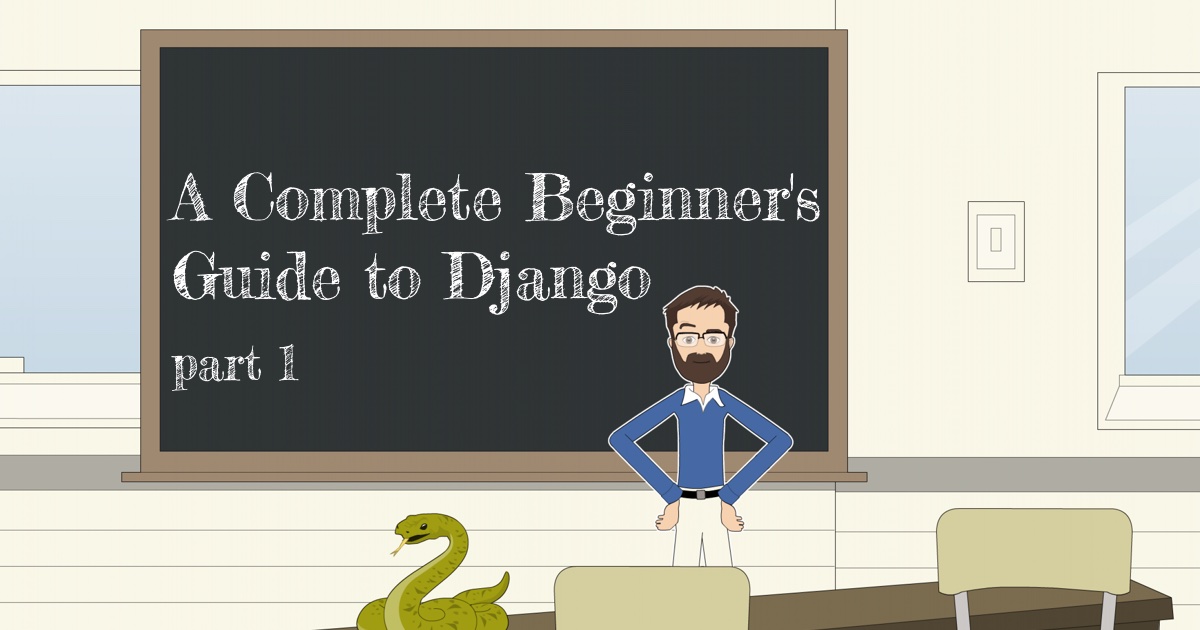