How to Create a Custom Django Middleware

In a nutshell, a Middleware is a regular Python class that hooks into Django’s request/response life cycle. Those classes holds pieces of code that are processed upon every request/response your Django application handles.

The Middleware classes doesn’t have to subclass anything and it can live anywhere in your Python path. The only thing Django cares about is the path you register in the project settings MIDDLEWARE_CLASSES.

Your Middleware class should define at least one of the following methods:

The Middlware classes are called twice during the request/response life cycle. For that reason, the order you define the Middlwares in the MIDDLEWARE_CLASSES configuration is important.

Let’s have a look on the built-in Middleware classes the django-admin startproject command sets up:

During the request cycle, the Middleware classes are executed top-down, meaning it will first execute SecurityMiddleware, then SessionMiddleware all the way until XFrameOptionsMiddleware. For each of the Middlewares it will execute the process_request() and process_view() methods.

At this point, Django will do all the work on your view function. After the work is done (e.g. querying the database, paginating results, processing information, etc), it will return a response for the client.

During the response cycle, the Middleware classes are executed bottom-up, meaning it will first execute XFrameOptionsMiddleware, then MessageMiddleware all the way until SecurityMiddleware. For each of the Middlewares it will execute the process_exception(), process_template_response() and process_response() methods.

The image below was extracted from the official Django documentation and it represents well the process described above.

To ilustrated this post, let’s create a custom Middleware class that intercept all the exceptions that occur in our view functions then grab the exception message and query the StackOverflow API and return the three top answers and print it to the terminal.

I will call it StackOverflow Exception Troubleshooting, or simply SOET. So it’s gonna be a Middleware for debugging, meant to run only when DEBUG=True. 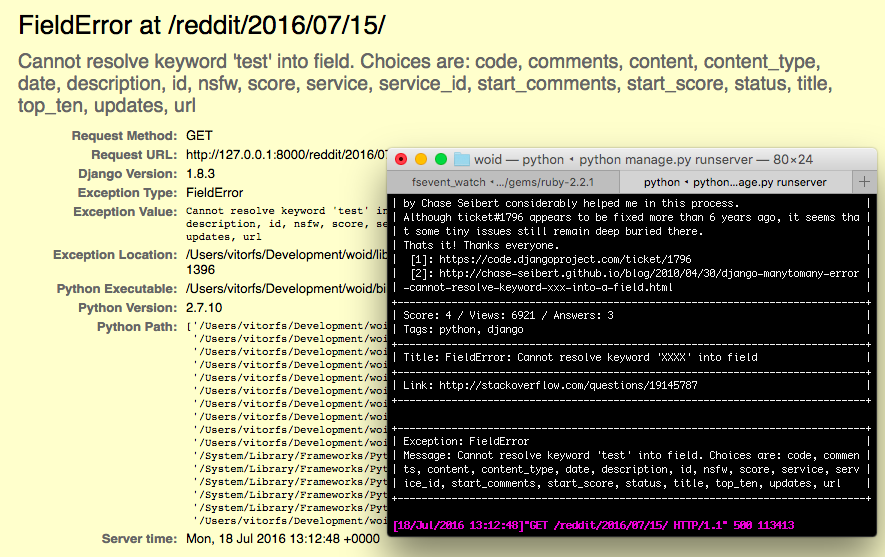 Our view function thorws an uncaugh exception, the SOET Middleware process it, search for a solution on StackOverflow, and print the three most relevant results for the developer directly in this terminal window.

Cool right? You will see how easy it is to implement it.

For this example I created a Django app named soet because I wanted to make it available for everyone. I will get back to that later. But if you already have an app that makes sense to create the middleware in, go ahead.

Inside the soet app I created a file named middleware.py. At the moment it looks like that:

Now I gotta register my new Middleware in the MIDDLEWARE_CLASSES configuration:

I’ve registered it as the last one because the process_exception() method is only processed during the response cycle, and I want my middleware to be executed first so no other Middleware supress the thrown exception.

At this point our brand new Middleware isn’t doing anything really. But it is already being executed. We can test it by putting a print statement inside the process_exception() method. Also it is important that our method always return None so to keep the flow of the Middlewares processing. We don’t want to affect the behavior of what is returned to the client. 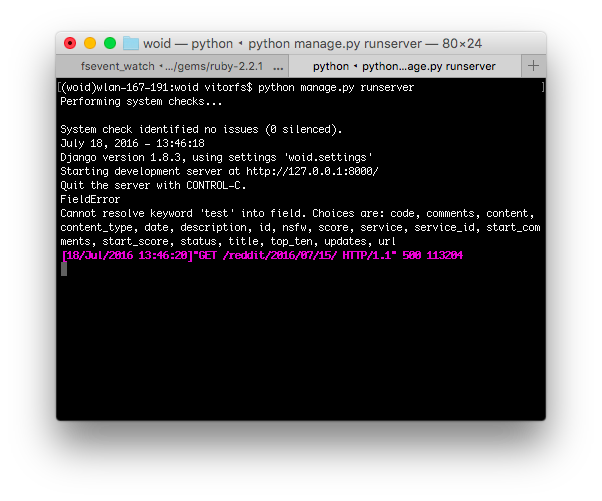 Now let’s make sure we are only executing this Middleware if the DEBUG=True:

The idea now is to use the exception message and the exception name to query the StackOverflow database through its API in order to find relevant solutions.

To save us some time and avoid struggling with the python standard libraries urllib and urllib2, let’s just use the awesome Requests library.

Also I will not go into much detail about the StackOverflow API. The previous link will take you to the official documentation where you can learn more. That being said, I will stick with the /2.2/search endpoint. 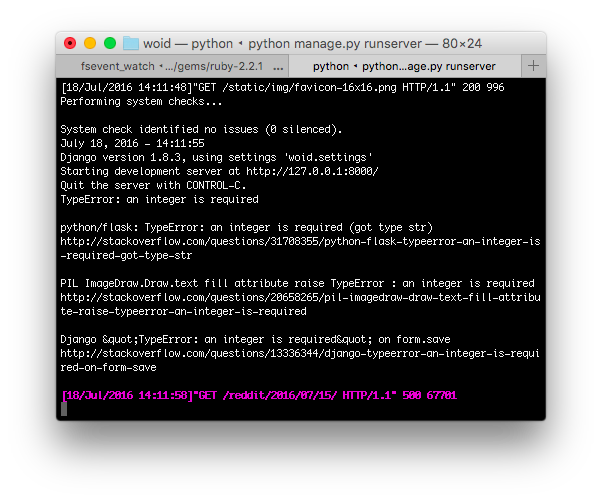 So at this point we are already consuming the StackOverflow API! It is pretty much it. Now we are listing the top 3 questions with the tags python and django, displaying its title and the question url.

Now it is a matter of selecting the right fields and displaying it in the terminal, using the same strategy.

Here is a quick start if you want to try it:

2. Include “soet” to your INSTALLED_APPS:

4. Make sure you are running your project with DEBUG=True.

5. Start your development server and wait for the view exceptions (or not).